Well it just got released and the first review is in, and the review is very strong. We are very happy to see Blitz Magazine of Rock & Roll was the first to review "Lancer" the music video (based on our books "Lancer; Hero of the West"). Performed by million selling artist/producer Ron Dante and co-written by Oscar winning songwriter, Al Kasha, Lancer is a hit! Below is the review and the video attached.

“Ron Dante, who has long maintained a state of the art home studio and who keenly foresaw the growth and development of internet radio more than a decade before the fact, has just added to his most impressive legacy with an all new composition, Lancer, Hero Of The West. Written in tandem with lyricist Al Kasha and with fellow mutli-faceted producer Ted Perlman handling the instrumental responsibilities, Lancer, Hero Of The West finds Dante rising to the occasion with characteristic brilliance.

"It's based on a new book called 'Lancer' written by my pal Bob Brill of KNX Radio", said Dante.

And in its thematic solidarity with like minded works by Johnny Horton (North To Alaska), Frankie Laine (Rawhide) and Vaughn Monroe (Ghost Riders In The Sky), Lancer, Hero Of The West has provided Dante with yet another triumph to add to his most remarkable legacy. Here is a Bob Brill-produced video clip of Lancer, Hero Of The West, with vocals by Ron Dante…

We will also be showing the video at our book signing this Saturday, September 26 at 2pm at the Open Book Store in the Oaks Mall, in Thousand Oaks, CA. Free Turkish Delight for everyone. Please if you can go to Ron Dante's Facebook page and check it out and share it as well.

We are going into the studio tonight to finish up the Lancer; Hero of the West music video. We should have it on YouTube for all of you to see by either the end of this week or early next week. You are going to love the song. It's co-written by Academy Award Winning songwriter, Al Kasha and million selling artist/producer Ron Dante.

Ron has helped spearhead the video production with his good friend Ted Pearlman who is producing it. We put together about two thirds of it last week after working through legal means to get permissions and approvals for some of the video. Some of it I shot at Corriganville Park in Simi Valley. Corriganville is the site where many, many western movies were made and was a tourist attraction and movie ranch in the 50's and 60's. It is now a local park but retains much of it's movie heritage.

It's a good thing there has been some historical footage from the tourist arena and we're feeling good about having it. We think you will enjoy it. The video will be posted on YouTube and Facebook as soon as it's ready.

Don't forget our book signing coming up on September 26th at the Open Book in the Oaks Mall, Thousand Oaks, CA. It will be at 2pm. Hope you can make it. I'll bring my other books as well. All paperbacks will be $10.00, while the coffee table edition of Fan Letters to a Stripper; A Patti Waggin Tale will be more. Credit cards and debit cards will be accepted. 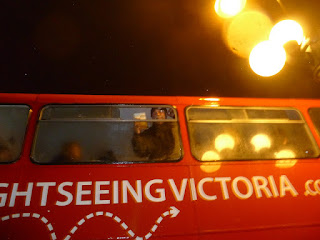 So it was a rainy night in BC as the bus took us on a tour of the daytime sites at "night" through the great city of Victoria. When the bus driver announced there were paper towels on the seats we figured we were in for a less than wonderful excursion. When he then said "this is the first time I've done this tour at night," we knew this was going to be a disaster. It pretty much was.

"Lancer; Hero of the West" pretty much stuck to his guns. He didn't complain, took in what scenery he could and stood his ground. Lancer makes the most of everything he can. You can check out more about him at our website.

Pulling out our flashlights the best part of the tour was getting out overlooking the harbor. The flashlights were needed because there were no working lights late at night at our stop. We walked the paths and shot cool shots across the harbor.

Then we passed through a park which was not lit. He pointed out a few things which would have been nice during the day. We constantly had to use our "paper towel" to wipe the windows of the bus which was vintage British. No heat or air and only two sliding portions of windows to help clear the mist.

Folks were angry and started making a lot of rude remarks. No need for that but then again there was no need for this tour. It should have been canceled and if so we could have signed up for another tour. At least four of us asked for refunds from Carnival and after much discussion we got half of our money back. That wasn't enough but doable.

We'd like to go back on a warm summer's day sometime. Yup it should have been called off.
Posted by Baseball in the 1960s at 6:41 PM No comments:

LANCER MAKES IT TO JUNEAU FOR FILIPINO SOUP

This was one cool photo to get. Here I am with Lancer, standing in front of the historic state capitol building in Juneau, Alaska. The old building is under renovation but open. I am standing across the street looking down into the plaza where the statue of a bear stands, fronting the US flag and the Flag of Alaska. Two blocks to my right is the Governor's mansion which is also under renovation.

Juneau is much smaller than I expected although I knew it was a more quaint state capitol than some others. We walked the six blocks from the dock (which is right downtown) up the hill to the capitol building. It was not a strenuous climb by any means. Once you get through the many jewelry stores which permeate any cruise ship port, you find some really good restaurants. In fact, we went all the way to Alaska to eat a Filipino soup called "Mami." It was quite delicious and made our short stop a little warmer on this cold and wet day.

LANCER GOES ON TOUR IN "ALASKA"

That's right, if you have been following my Facebook Posts you know Lancer; Hero of the West has been on tour in Alaska. Along with me and my wife, Paula, Lancer made stops in Seattle, took a small boat out to the Tracy Arm fjord, rode a train up the mountain in Skagway, visited the state capitol building in Juneau, weathered the weather in Ketchikan, rode an old English bus in Victoria, BC and went to the top of the Space Needle in Seattle. It was a whirlwind trip and more photos and video's to come.

Taking Lancer on tour sets the stage for our first book signing on September 26 at the Open Book Store in the Oaks Mall in Thousand Oaks, CA. Hopefully we will debut the song and video by then. "Lancer; Hero of the West" the song is ready, just the video is in production and we want to release them both at the same time. We will be taking cash and credit/debit cards by the way.

For those of you who follow this blog, I'll post the Lancer stops photos each day for a few days and  I'll post some other photos and video's not on Face Book. 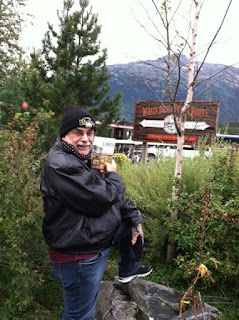 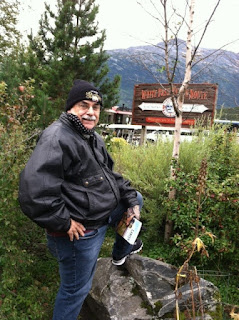 This photo was taken after a trip up the mountain by train from Skagway, which by far was the best  part of the trip for me. The glaciers were fantastic but the train ride up into Canada on the way to the Yukon felt more like Lancer-land, and yes there was research going on. Maybe down the road Lancer will have an adventure into the gold fields of the Yukon Territory; maybe.

We're hoping this video gives you a taste of the beauty we saw and helps you imagine some of the things Lancer might have seen as he goes through his adventures around the country.