One of the things I never want to do is to change a price either for an item or for shipping. In today's case I had to do both. Sorry to say due to recent increases at the USPS and other changes I now need to start charging a minimal fee for shipping books.

Whereas I was previously charging $10 for Lancer; Hero of the West - The Prescott Affair plus FREE SHIPPING, that just did not work anymore. I am now charging $4.00 S&H on all books domestically shipped from the web site.

Here is the reason why:

Padded envelopes big enough to ship the book cost about 50-75 cents each. The book I shipped today inside California went First Class for $3.62. Media Mail is NOT cheaper and takes forever to get to it's destination.

Obviously this puts the charge over the $4.00 I am now charging for shipping. I also had to place the price of to book up to it's usual Suggested Retail Price of $14.99 rather than the promotional price of $10.00 and free shipping.

So if you order the book today it will be $18.99 delivered. I didn't want to do this but really I had no choice. We have not yet been given the price of the new "Los Angeles Affair" but we expect the publisher to set a similar reasonable price. There will be some promotional prices at times and of course a digital download on Amazon will be much cheaper. However, for those of you who like the smell of a real book and when you buy a real book you also get one of our Lancer bookmarks, the paperback version is the way to go.

Thank you so much and I appreciate your support.

Well, to say I've not been blogging is an understatement. For the past two months I haven't had much to say so rather than fill your mailbox, Facebook and Twitter pages with endless promotion, I chose not to blog. Blogging 101 says you must write daily, but common sense says when you have nothing to say, don't say it! Huh? Okay.

Well, now I have something to say; I have been assured by my publisher you should be able to purchase "Lancer; Hero of the West - The Los Angeles Affair" around August 7th. The digital version should be "live" at that time and the paperback version a few days later. You can either purchase the download on Amazon (link to come when it's live) or the paperback from Amazon or me directly at www.bobbrillbooks.com. If you choose the latter and wish to have it signed please let me know with the order or in an email to brillpro@gmail.com.

Lancer; Hero of the West - The Los Angeles Affair, is more intriguing than the Prescott Affair which was well received. It has more of an international flavor taking place in a very international city, even in the 1880's.

Many thanx to our publisher, Troy Smith of Western Trail Blazer. The company recently had several books selected for award nominations in the western genre and publishes a number of western authors. We hope to see Lancer in those nominations next year when voting comes around. 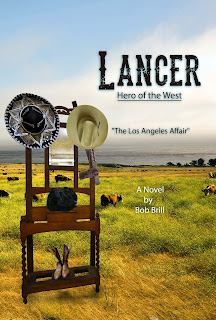 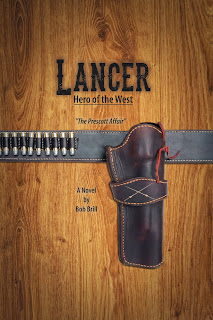 Several people have asked about Lancer as a TV series and I would be lying if I said the thought hasn't crossed my mind. For now we'll keep him on the pages of western novels but in the future we'll see where the interest lies and maybe I'll take it that route. A feature film is also not out of the question.

For the moment, I hope you enjoy the new book when it arrives, we're setting up some local book signings as well and more about the song and the new video coming in upcoming blogs. I promise I won't wait 60 days to write the next blog, but I am already hard at work on "Lancer; Hero of the West - The Santa Fe Affair."