A good time was had by all. The best way to sum up the 2016 Santa Clarita Cowboy Festival.

For me it was a time to meet a bunch of folks with similar interests and goals in mind. For them it was time to hear some of my stories, and in response I got a lot of good stuff headed my way. It was also a time to take a little hit (no a pretty big hit) from good-natured friends and relatives about my head gear.

I chose to wear my new favorite hat on Saturday (commonly now being called a "pork pie" hat from my friends, especially those in Scotland who love westerns) instead of my Cowboy Hat. I'm not a cowboy and while I love the West, I write good stories about the west, I'm not a cowboy. As much as I loved the era, I'm not sure where I'd fit in in 1885. 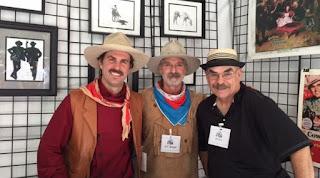 (Eric Heisner, Al Bringas and me)
So I chose not to wear THE hat. Bad mistake. Anyone who was looking for a good book hit the first table with some great coffee table books on Western ranches which drew a lot of attention with some slick colorful pages, passed right by me and moved directly to my two new good friends Eric Heisner and Al Bringas. Now these two guys (pictured with me above) are two good looking western actors who have quite a biz going. Eric is a full-time actor with some credits who is the author of their books while Al is the illustrator.

Together they make quite a pair and dressed in their western digs, folks made a bee line past me to them (especially the ladies). Actually I greeted a few of the women with my positive charm hoping to engage them with my guy,  "Lancer; Hero of the West" and after answering the greeting they moved right on to Eric and Al. I was surprised most of the ladies passed on Lancer's favorite treat "Turkish Delight," while men usually tried it quite readily. One couple was very excited when they saw it, "we haven't seen this since our trip to Istanbul!"

Al's artwork is super by the way and the guys make and sell replica movie bandana's which are costly but absolutely a must have if you are gonna dress the part. (Next year for me).

After Eric and Al, they moved onto Dale Jackson, Jim Christina, J.R. Sanders, Gary Williams (I know I missed someone) and if they came in the other way they were posing for selfies with the well known Peter Sherayko who looked like he was right out of "Lonesome Dove." So next year, I'll break down and buy the boots, something leather, a much better hat and I'd love one of those frock coats but it might be too hot in Santa Clarita for that. At least the second day I did wear my western hat which turned the world upside down -- I wish. I am a guy who admittedly always wears a hat well - just not a cowboy hat. Although some of my Face Book Friends did change their tune Day 2. 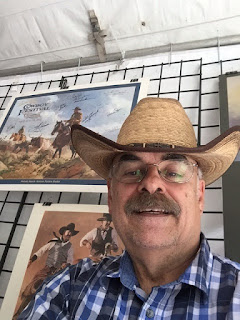 No guns (akin to the covers of my Lancer novels with the gun-less holster covers) but you can't bring guns in anyway. And don't even think of getting me on a horse. I am a dog lover and horses and me just don't get along. Although I guess if this were 1875 or so, I'd have to break down and learn to ride one. An employer asked me once "Bob, what do you want to be when you grow up?" My answer was quickly, "The Lone Ranger." Not because of the story but because of the man and his mission as well as his code.

The really great thing about the festival and the Buckaroo Bookstore set up by Bobbi Jean Bell and husband Jim (who took care of their authors in a way it makes you want to come back) is the friendliness and camaraderie. And that was part of what the Old West was about. Sure there was a lot bad stuff mixed with the good but the fellowship and camaraderie outshone it all. 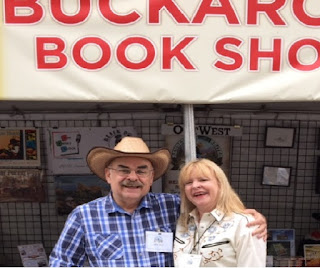 (me and the always smiling Bobbi Jean Bell)

And I for one appreciated that. Sure I would like to have sold more books, everyone could have, but that is the world we're dealing in. Hopefully, we've made a dent in the next chapter in our lives and the dent is positive. And if you're looking for a younger touch, Eric and Al produced a wild west coloring book as well.

ON another note, the Peach Cobbler was great as usual, but no sign of the Native American Fry Bread this year; Bummer.

Looking forward to next year and other such events. And for all of us Keep It Going.
Posted by Baseball in the 1960s at 1:59 PM No comments:

The Santa Clarita Cowboy Festival, an annual event, is taking place in Old Town Newhall right now between the 14 and 5 Freeways in the Santa Clarita Valley. I'll be there on Saturday and Sunday from 1:30 to 6pm, sooner if I can make it.

Park in one of the off site parking lots (no parking in Old Town) and take the FREE Shuttle to Hart Park. Admission varies depending on age but it's from $7 to $10 and lots of vendors, music, great food you don't normally see except here and just a great time.

Visit me and seven other Western Authors at the Buckeroo Bookstore on the walk in Hart Park. We'll be there signing and selling our books. As a Cowboy FEST Special we'll be selling soft cover copies of both Lancer; Hero of the West books for $10 each (tax included). We'll take cash and credit/debit cards for purchase.

C'mon out and have a great time. I am especially thankful to the promoters to providing us with volunteers to get food because I can't take the time away to go stand in line for the best PEACH COBBLER you'll ever taste. That and Cowboy Coffee will stand out on the day as well as the Native American Fry Bread (one of my favorites). So take it from a guy who likes to eat his way through these type of things, enjoy while the enjoying is good. 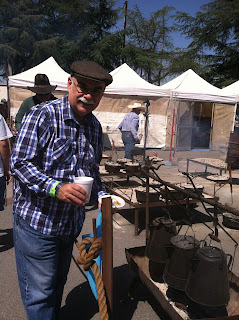 Me at last year's Festival with a nice piece of Peach Cobbler ala mode and some down to earth and tasty gritty Cowboy Coffee. Lancer couldn't have done it any better. Which is something readers will find out in the upcoming "Lancer; Hero of the West - The Santa Fe Affair." Due out in late Fall, early Winter.


The weather is expected to be excellent and if you haven't tried it yet, check out Southern Smoke, a new eatery in Old Town. Make sure you try the fabulous Ho Cake. And the micro beer. Ask for a taste and they'll give it to you. We'll probably be there on Sunday night after the Festival closes down unless the line is long and the wait is too much. Which it might be, but then again remember most vendors want to get out and gone after a several day event so this might be the best time to try the restaurant.

See you THERE and remember, if you can't make it you can always order downloads from Amazon and paperback copies from us directly at www.bobbrillbooks.com.

The Santa Clarita Cowboy Festival begins this coming week and culminates on the weekend of April 23-24. I will be there signing Lancer; Hero of the West novels on both Saturday and Sunday from about 1:30 pm to 6 pm. Hope the drive from Miracle Mile where I work to Santa Clarita is a light one and the shuttle is moving quickly.

The annual cowboy festival (link below) is a really great event and aside from western authors such as myself making appearances with our books and expanding somewhat on the western experience, there are bands, displays, vendors or course and some really great food you only get once a year.

One of my fav's is the Indian Fry Bread but not to be outdone by the home made peach cobbler and authentic cowboy coffee; grinds and all. The Peach Cobbler is amazing and there is always a line. I'm glad some of my family will make the trek to the festival so they can stand in line to get some cobbler for me.

The festival is at William S. Hart Park mainly, which is in downtown Old Town Newhall. Adjacent to the festival itself are the shops of Old Town and I suggest if you get the chance (maybe not during the festival because seating will be limited and waits probably long) checking out Southern Smoke. It's a great new BBQ restaurant not to be missed. It's also a micro brewery and they will give you tiny samples of some of the many beers on tap.

Some of the authors will be at the OutWest Boutique and Cultural Center one block from the Park at 22508 6th street. Come on out to the event and buy a couple of books and get caught up on your western heritage. My second book "Lancer; Hero of the West - the Los Angeles Affair" takes place mostly in the area around San Fernando, Sylmar and Newhall as it was in the 1880's.

Check out this festival link www.cowboyfestival.org

You can follow us on FACE BOOK at https://www.facebook.com/lancerheroofthewest/