By Bob Brill
Author, Lancer: Hero of the West - The Prescott Affair

Again I wish to thank the people of Prescott, Arizona, for their support on our recent book and publicity tour in the Mile High City. The folks at Peregrine Book Store did a fine job in promoting and running the event and my thanks go out to them; particularly Tom and Susan. Sales of "Lancer; Hero of the West - The Prescott Affair," were good too.

Looking forward, as we move toward the next book; The Los Angeles Affair, we still get comments on how the main fictional character of Lancer, mixes with real life and legendary figures. One such character is Doc Holliday.

While Holliday, best friend of Wyatt Earp, was known as a killer and quick draw gambler, he's been raised to anti-hero status by legend. Since legends grew from stories (true and otherwise) of the day, there really isn't a reason to besmirch the legendary. A wise newspaper editor once said "when choosing to tell the tale of the real life man versus the legend, print the legend." That is a paraphrase but you get the picture. 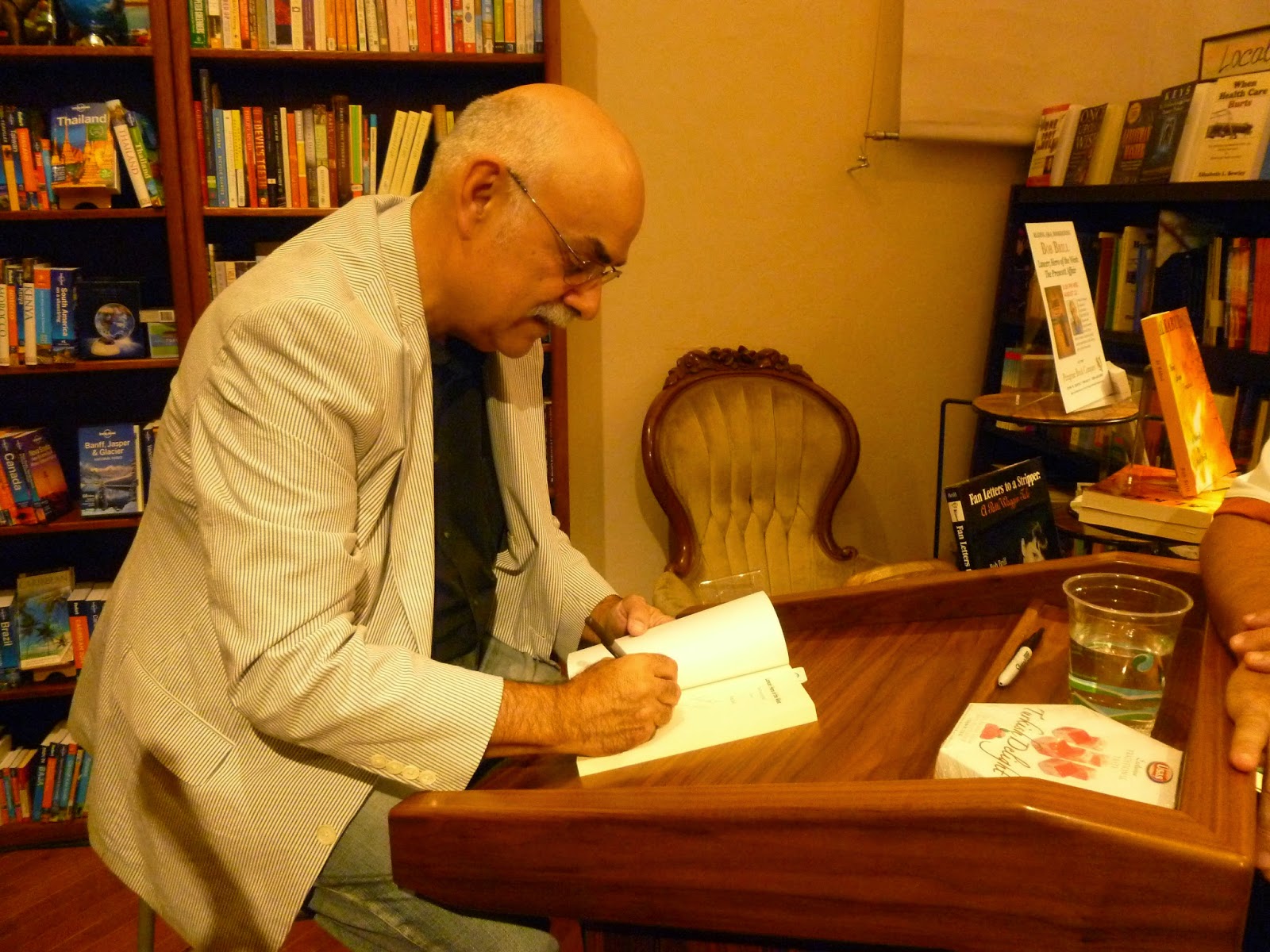 I use Holliday because he was a prominent figure in Tombstone (where Lancer is based) at the time. I also like to use Holiday because while he has some of the same qualities as Lancer, they are different in one very important aspect. Holiday, for whatever reason, could not control his qualities. Lancer can and does. Maybe it is because of the terrible illness Doctor John Holliday suffered from and which led him on a path of destruction. Perhaps if Holliday did not suffer from TB, he might have had the life Lancer has.

Lancer remains true to his character and through the pages of upcoming books, more about Lancer will be revealed. There is a lot to know about this good guy gunslinger and I hope you, as the reader, will keep coming back to learn more.
Posted by Baseball in the 1960s at 11:48 AM No comments:

One of the most positive response I get from people who read Lancer; Hero of the West - The Prescott Affair, is how I mixed real life, legendary characters into my fictional story. I was asked by Sharlot Hall Museum Director Fred Viel while I was in Prescott last week for the book signing, "is the book an historical novel?" I had to be vague because it is, and it isn't. Fred's definition of "historical" novel lends to real life people with the author's words, involved in old and new adventures.

Lancer does intermingle with real life characters but it's not the main body of the story. The story itself is totally fiction. Lancer, and this won't always be the case, begins his adventures in Tombstone where these legendary characters live and deal with him. You can find out more about Prescott and the wild west not only at Sharlot Hall but also at the Peregrine Book Store where we did the signing.

Below are some photos taken during the publicity day which include myself and Mayor Marlin Kuykendall, with Bo Woods at my old station KNOT Radio and me with Sandy Moss of AZ 7 TV where I was a guest on the station's Morning Scramble. More to come. I have to note the last photo below is me standing outside the Press Box in Prescott where at age 18 I did my first play-by-play gig. 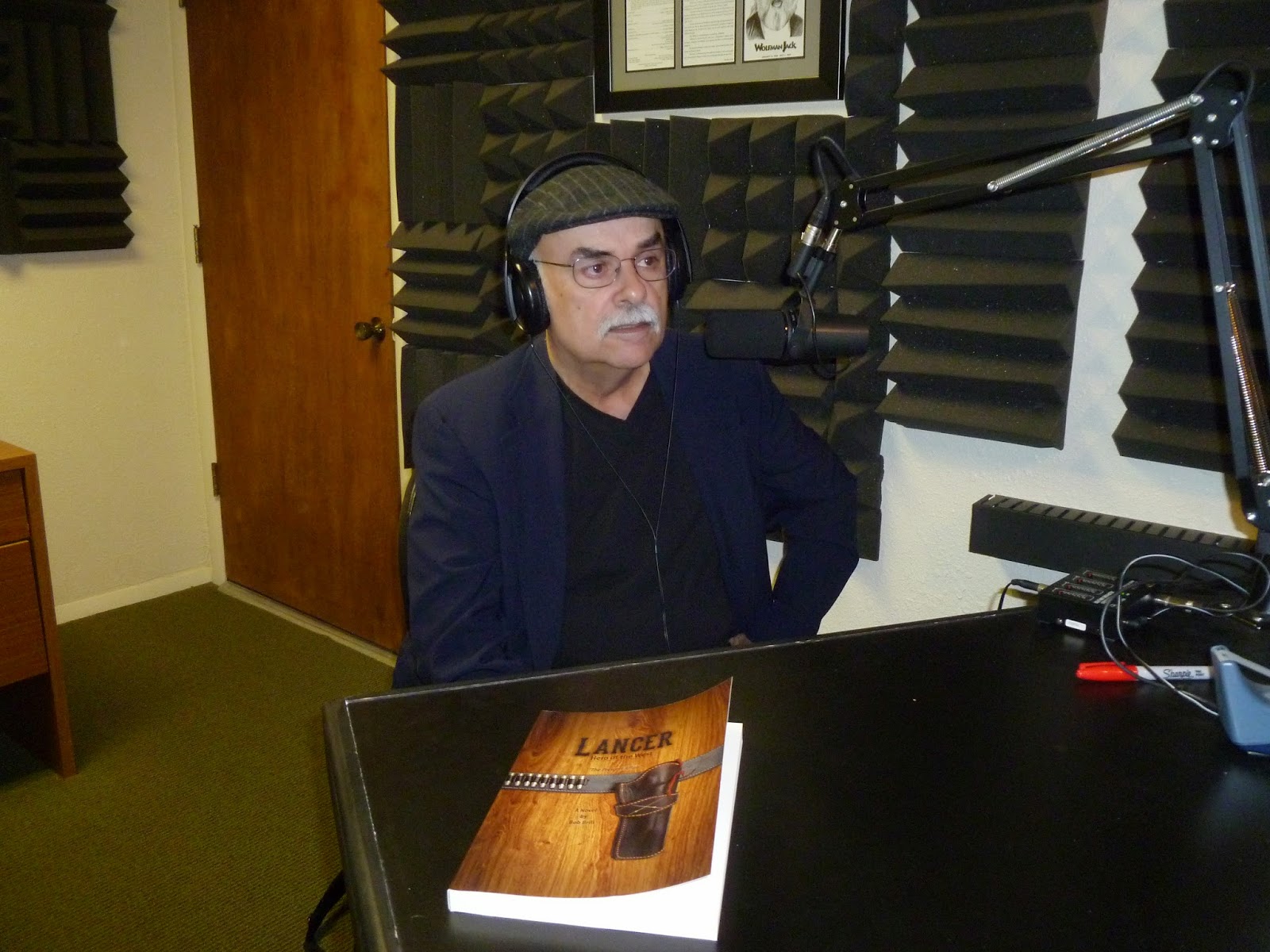 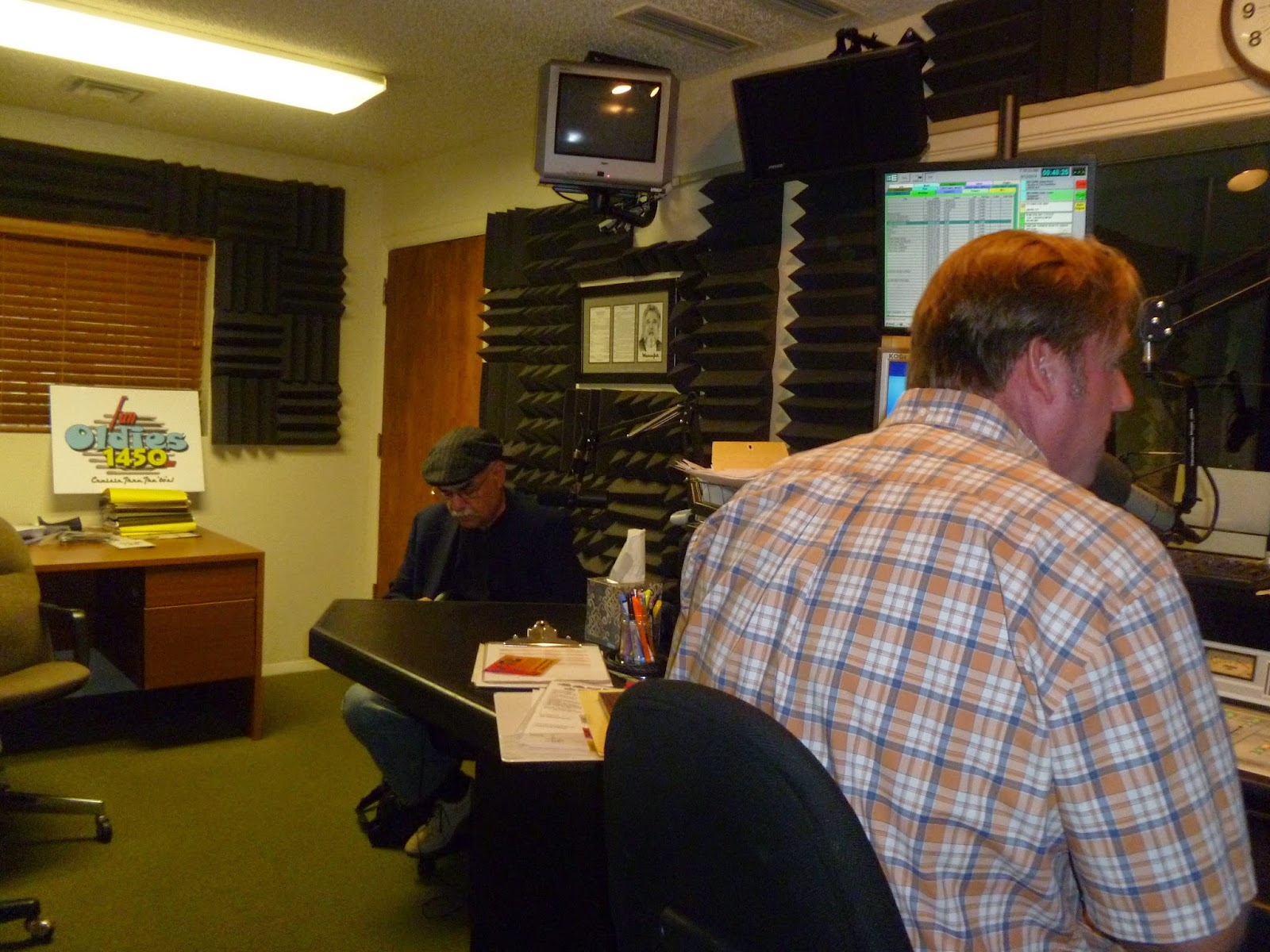 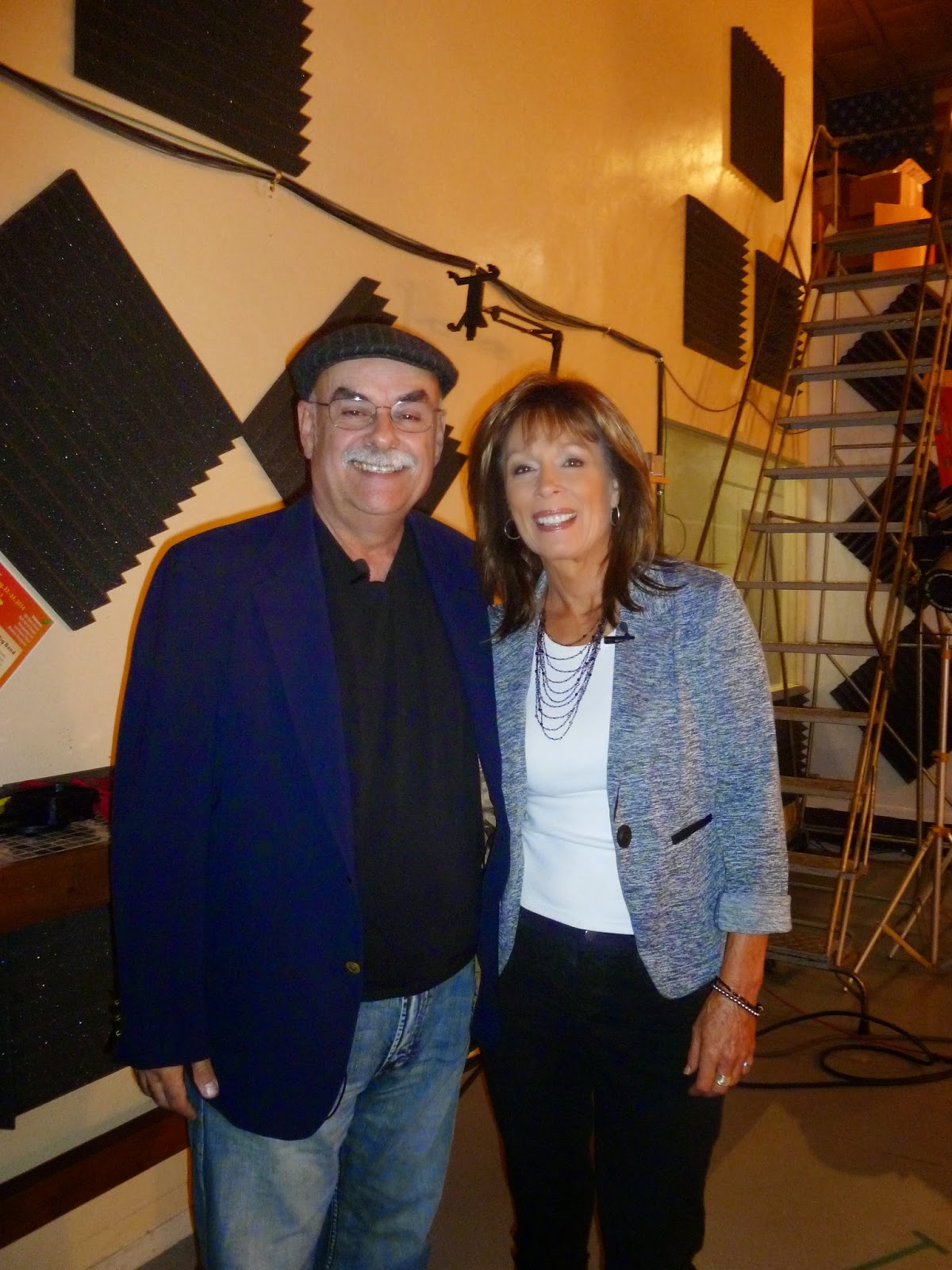 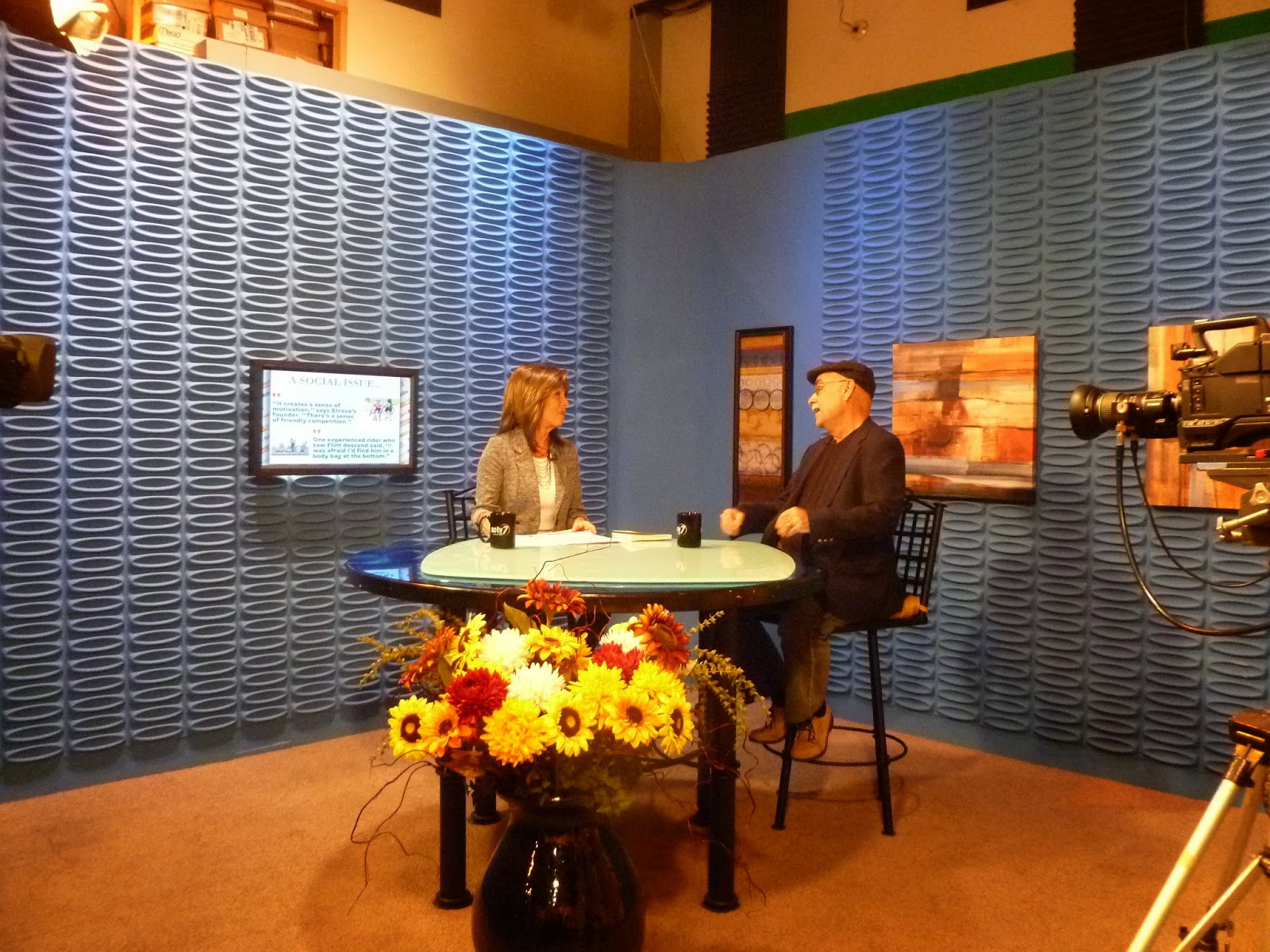 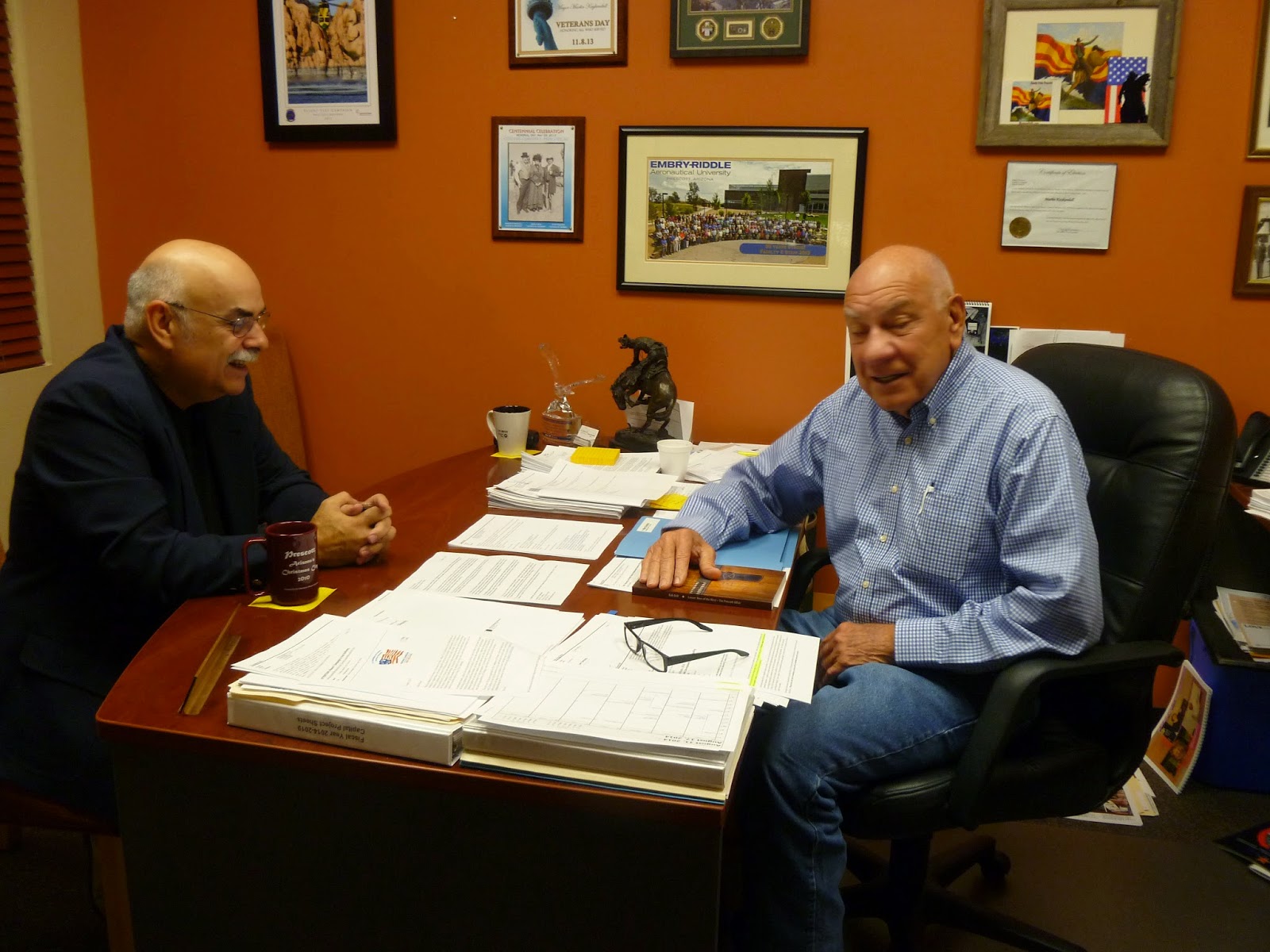 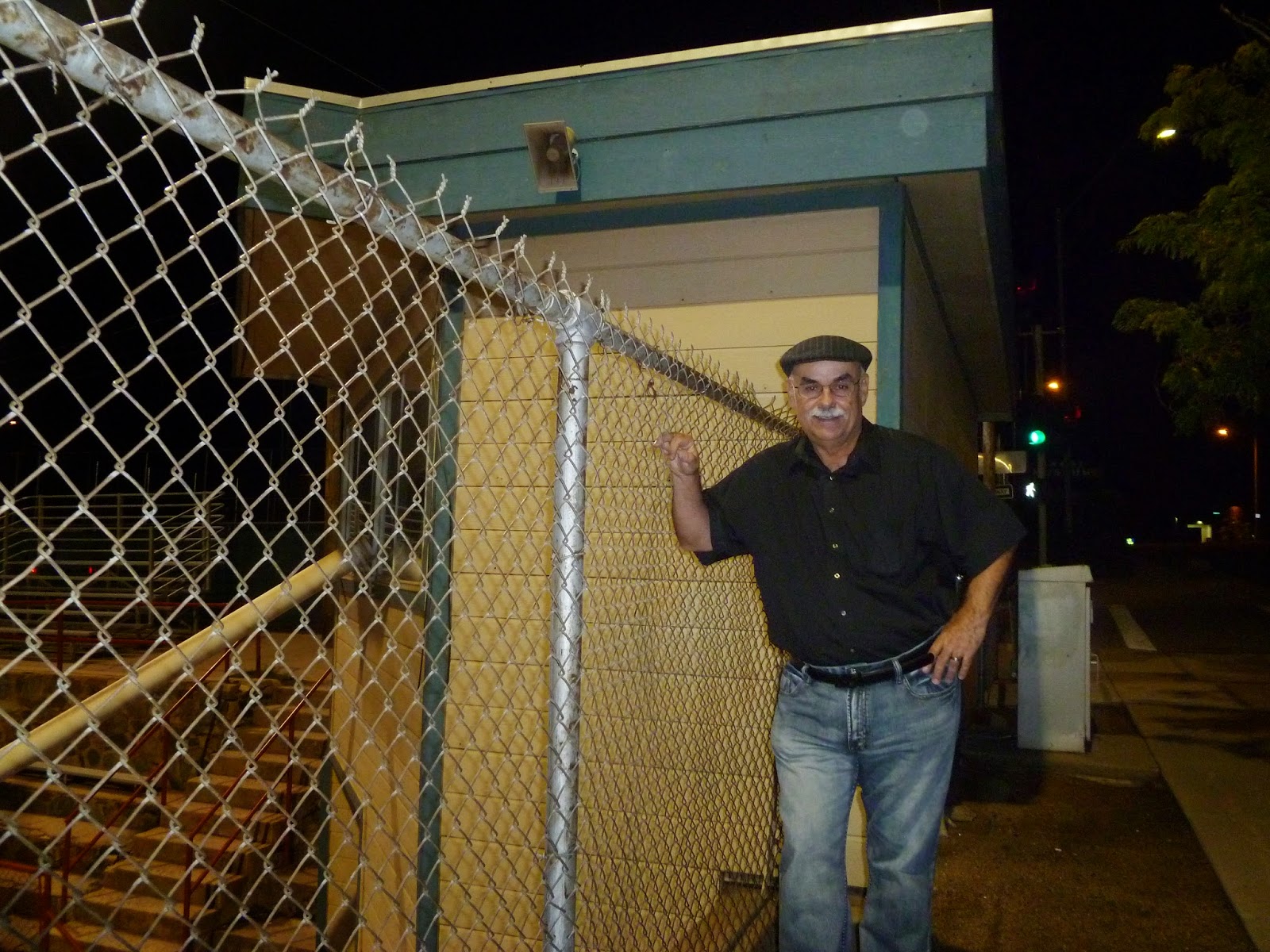 The book signing for "Lancer: Hero of the West - The Prescott Affair," was great and the publicity tour was really super, all culminating at the Peregrine Book Store in Prescott August 13th. I'll load up the photos over a couple of blogs since we have a bunch and I want to give credit to everyone who helped out. I'll start with the end first as we had a number of books sold. Tom, Susan and the entire staff at Peregrine were just super as were the people of Prescott. My good friend Darcey had a front row seat and it was good fun to spend some time with an old high school chum. In our next blog we'll thank those in the media who made the trip more memorable. 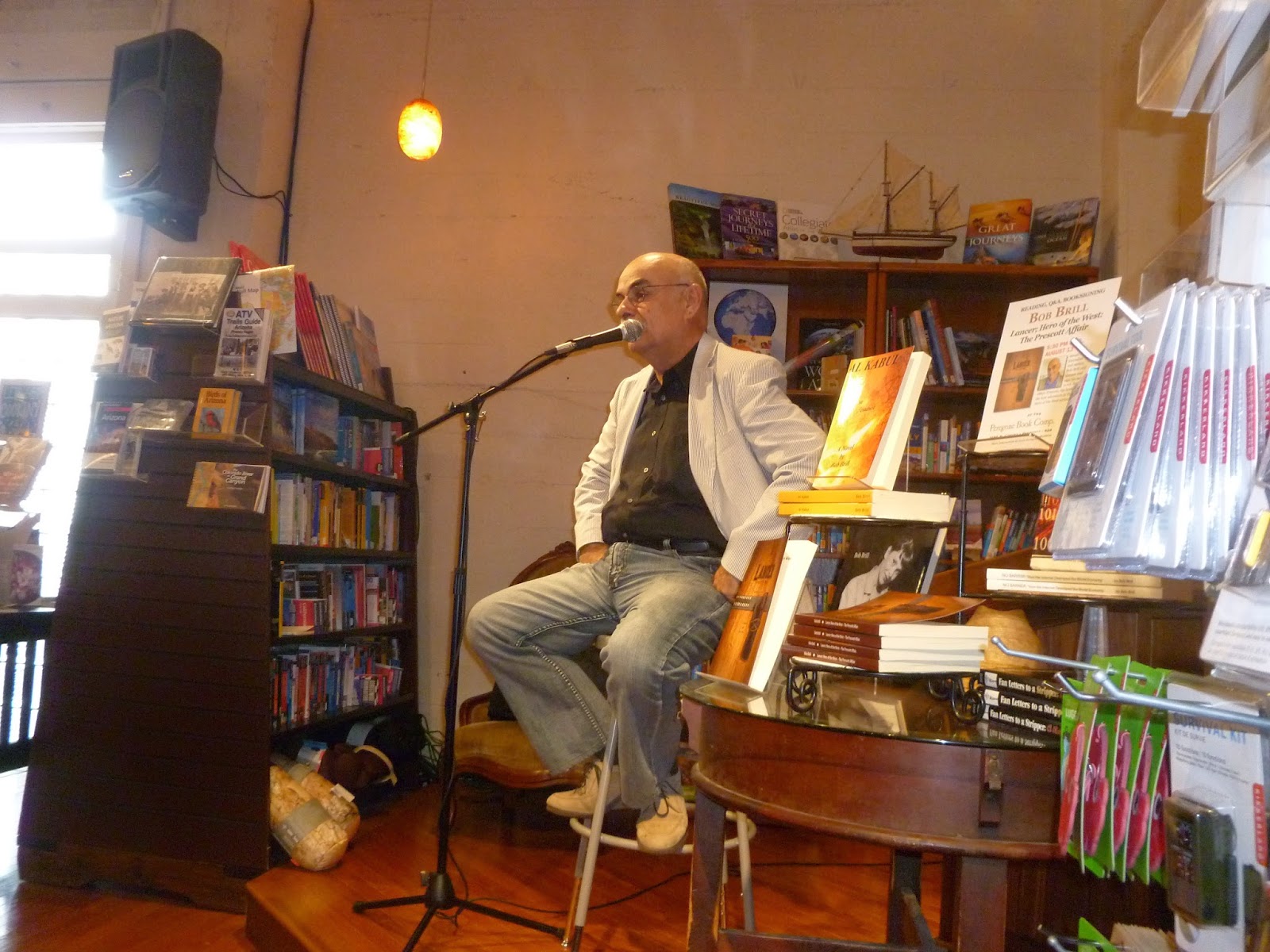 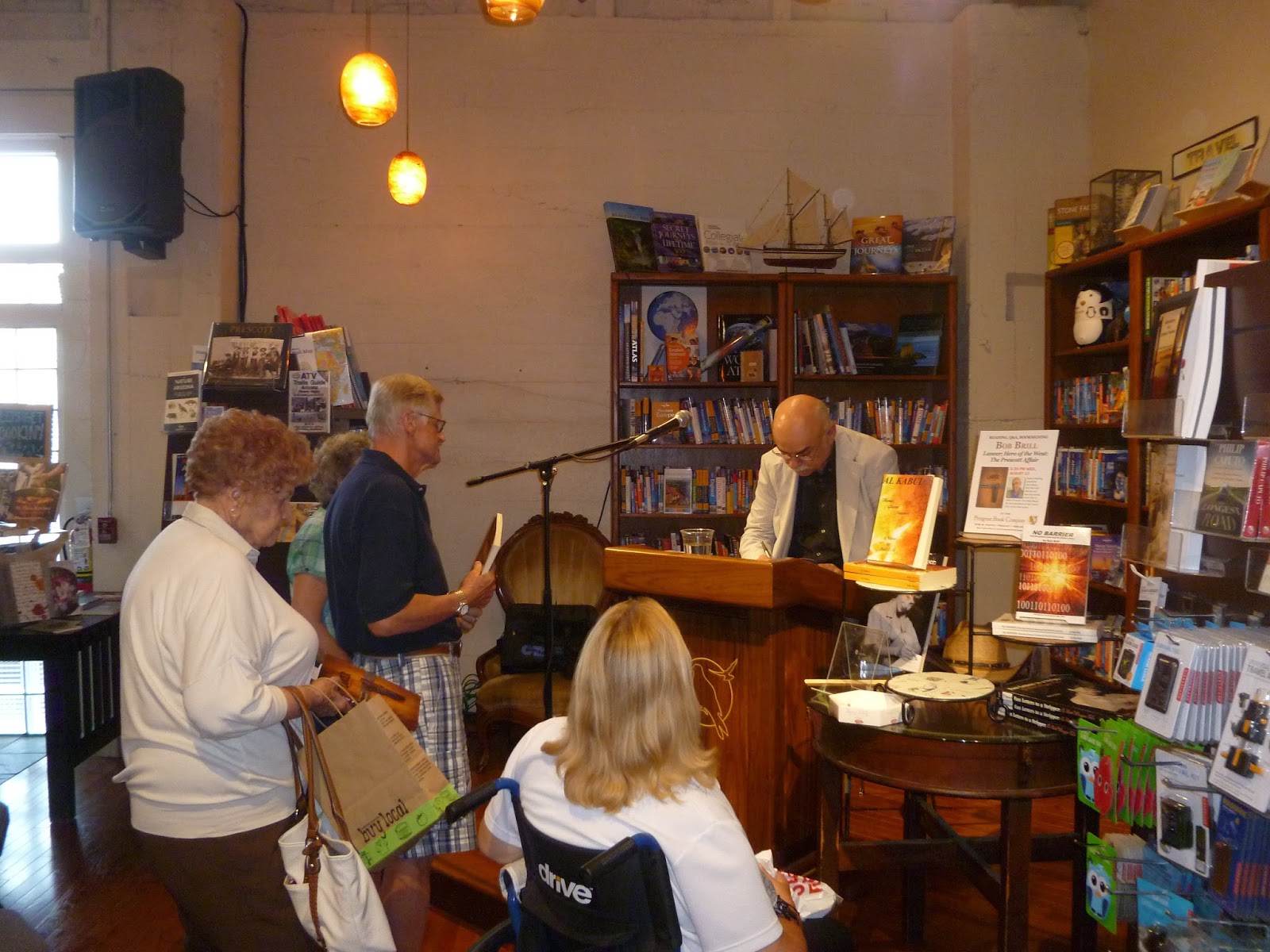 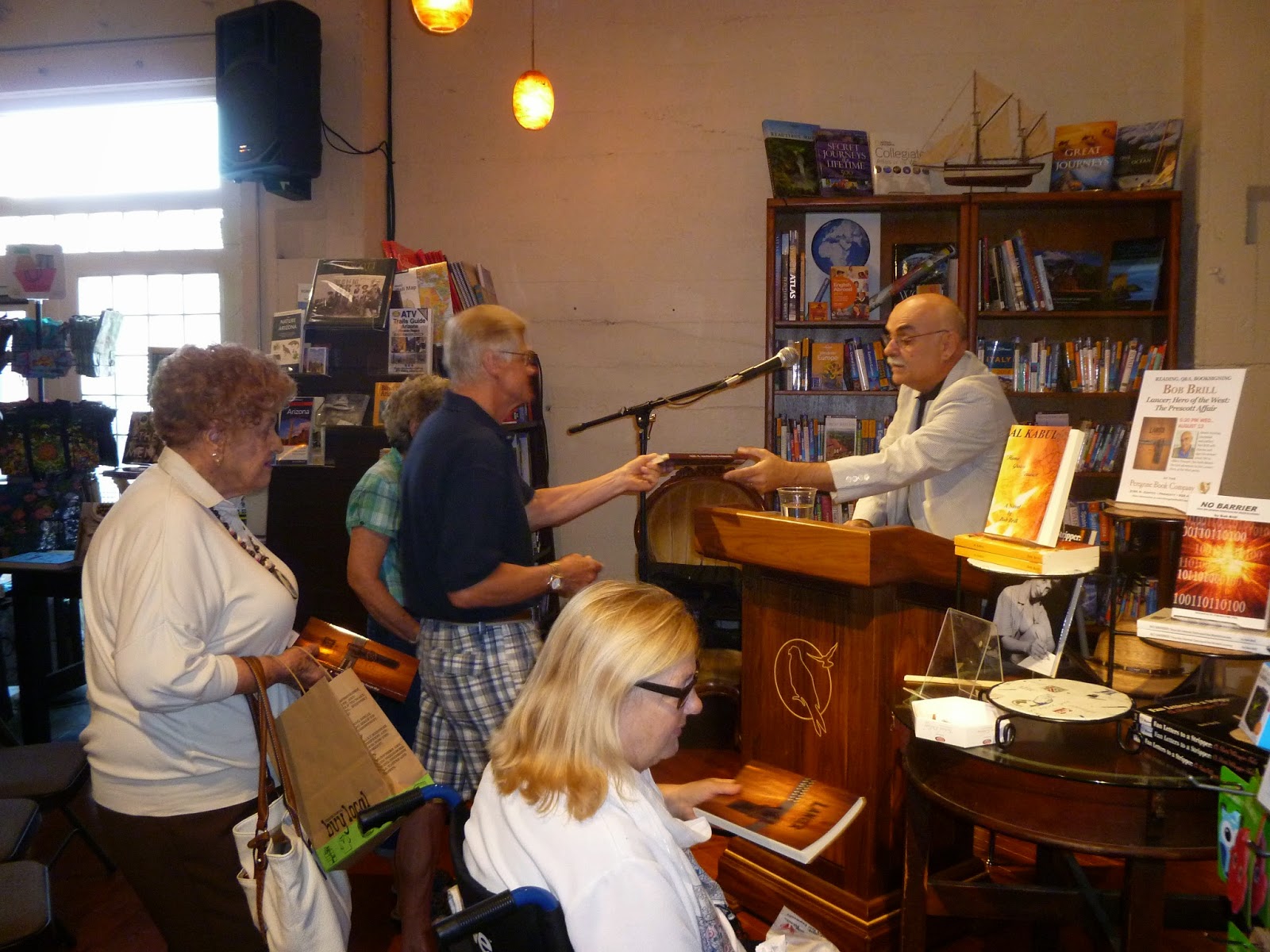 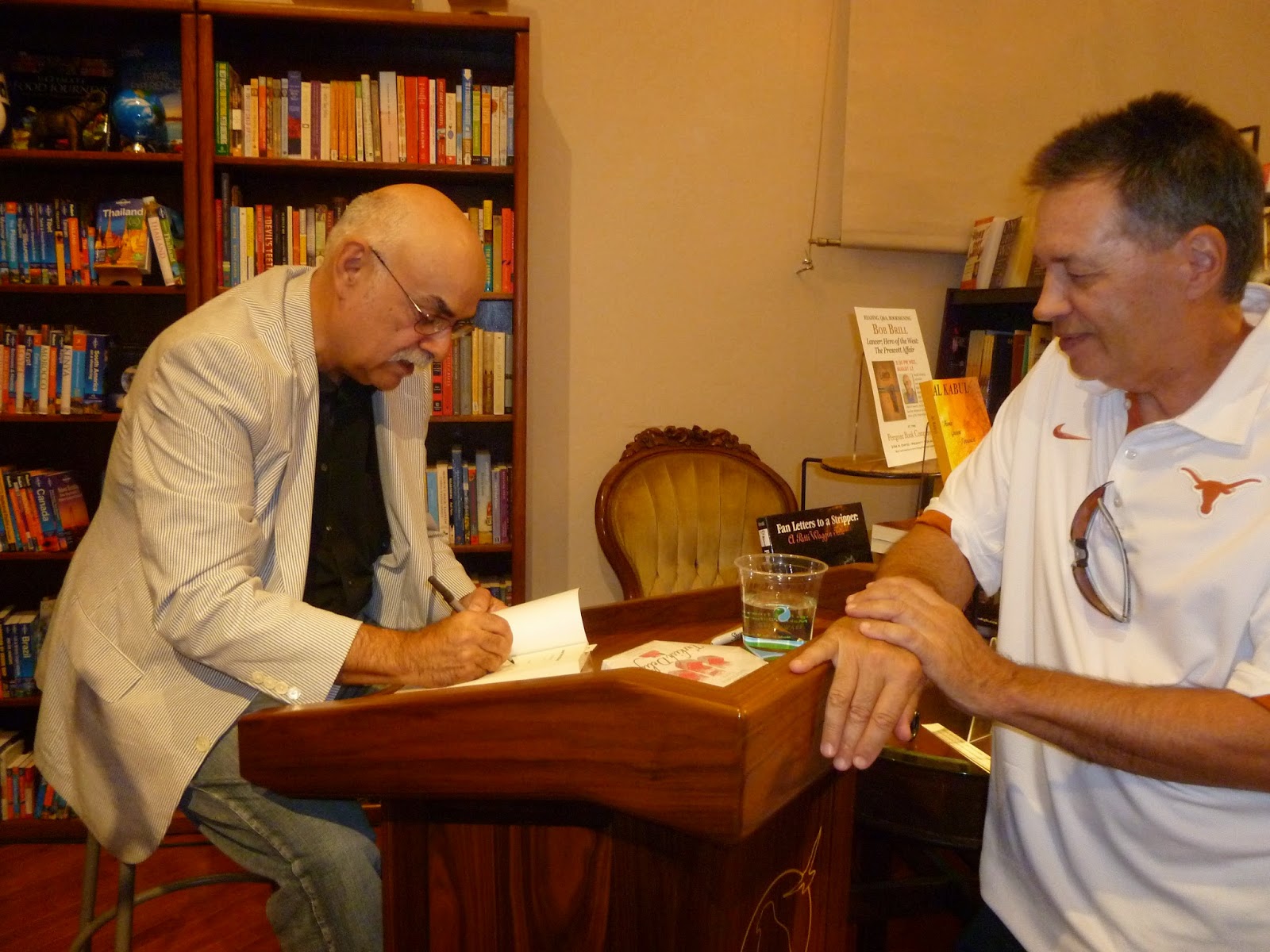 In Prescott, Lancer meets up with and works with Sheriff Jackson. The sheriff is a nice fellow, does his job and is not unpopular in town. He likes to eat which might give the reader the impression he may have a big belly. That is up to the reader. It is a question I anticipate may come up when I'm at the book signing at Peregrine Book Store in Prescott on Wednesday, August 13th.

What I didn't do in creating the character of Sheriff Jackson is to model him after Prescott's real life hero sheriff, Buckey O'Neill. O'Neill, well known as one of the Teddy Roosevelt's Rough Riders later in his life, ran the town about the same time. The reasons I chose not to add O'Neill to the mix while I did feature Wyatt Earp and Doc Holliday, are many.

Both Earp and Holliday are legends who have grown well beyond their own boundaries in American western folklore. It really doesn't matter how you incorporate them into a story; they could have been there and done that. The two have outgrown their own persona where the legend has become much more than the fact. A newspaper columnist once said (and I'll paraphrase here) "when the man outgrows the legend, print the legend."

While in O'Neill's case there are legendary stories (trying to rescue two buffalo soldiers who fell overboard in Cuba, etc.) there is much more fact known about the former Rough Rider. Prescott residents know the story well, it's documented, and there are very likely relatives of O'Neill still around to contradict whatever a writer of fiction wants to write. It is a slippery slope and one this author chose not to tackle.

Sheriff Jackson is a strong man in his own right and well respected by Lancer and even the deputy who would like to be sheriff one day. It was a choice this writer chose to make.
Posted by Baseball in the 1960s at 9:41 AM No comments:

Just a few days away from our book signing at Peregrine Book Company in Prescott, Arizona. This Wednesday from 5:30 in the evening until 7:00 o'clock, I'll be at the book store, available for questions and answers, as well as signing copies of my book, "Lancer: Hero of the West -- The Prescott Affair."

I will also have copies of Al Kabul; Home Grown Terrorist, No Barrier; How the Internet Destroyed the World Economy, and Fan Letters to a Stripper; A Patti Waggin Tale, on hand for purchase and signing. Special Edition copies of Fan Letters however, must be purchased via our website or via direct mail through email.

The Prescott Daily Courier, the first paper I ever wrote for professionally, is doing an article on me and the book signing for release Wednesday, the 13th. I will be appearing on Prescott's cable Channel 7 TV at 8:30 in the morning on Wednesday and sometime during the hour before, plans call for me to appear for a couple minutes with Bo Woods on KNOT Radio (my old station and my first). So if you are in the area, or streaming you can check it out.


I am very much looking forward to this trip, not only because it is exciting to do a book signing (if people show up that is) but also because some old friends live in the area. It will be good to touch base with them.

I usually don't do selfies and post them but I was at a fund raiser last night for Los Angeles Sister Cities and met Cheech Marin of Cheech & Chong fame and well, I'm a fan. Living through the 60's who wasn't a fan (Dave's not here, man). So I did the thing and posted it here. Nice guy. 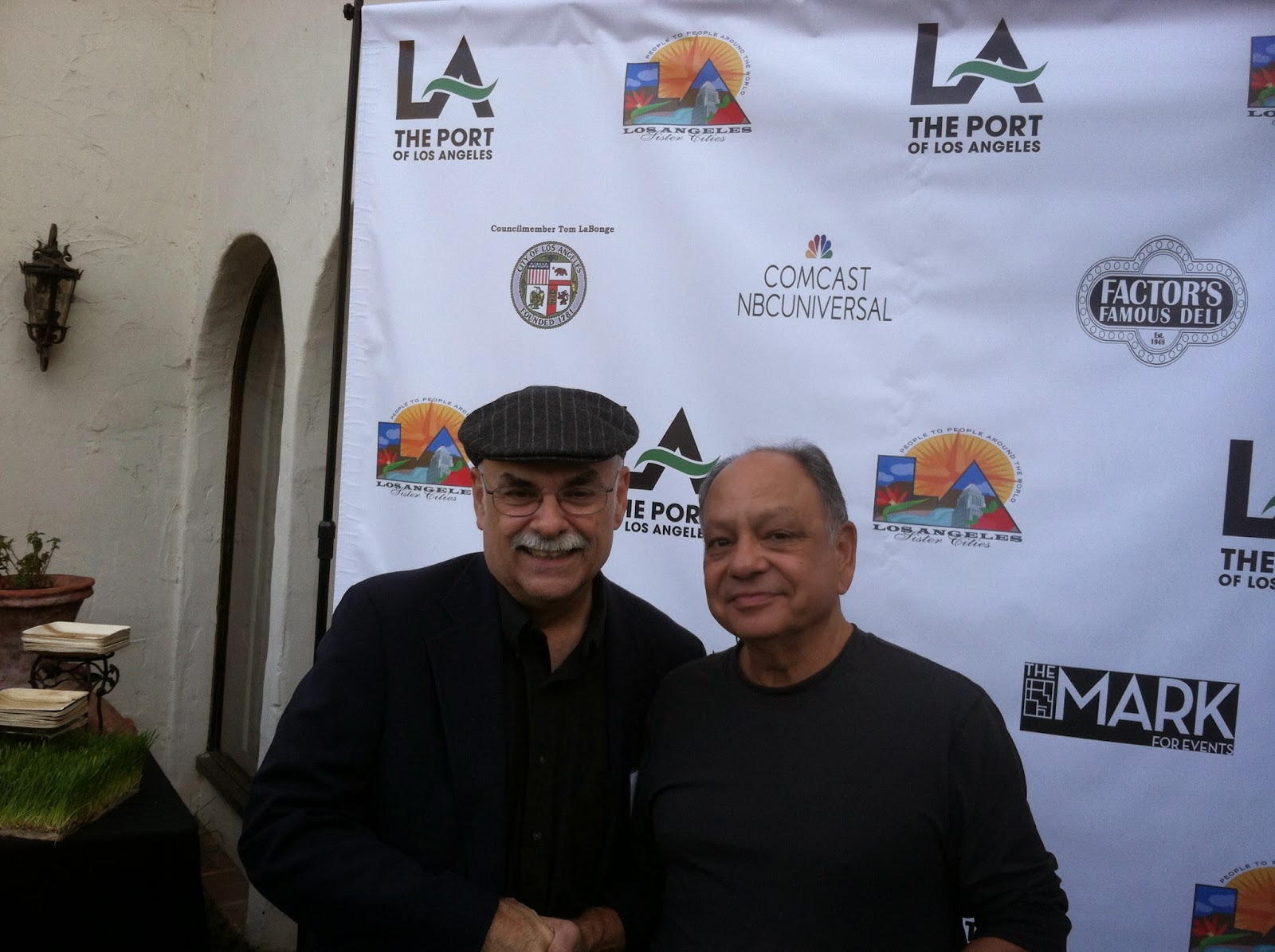 Hope to see you in Prescott on Wednesday, August 13th at Peregrine on South Cortez!
Posted by Baseball in the 1960s at 1:39 PM No comments: