LANCER; Hero of the West - The El Paso Affair is "LIVE"

Yes! We are rolling out the fourth adventure for Lancer; Hero of the West. This one is the El Paso Affair.

Of particular interest in this novel is it takes place the day before the famous Gunfight at the OK Corral. As you know if you follow the series, Lancer is very good friends with Wyatt Earp and Doc Holliday, both of whom make early appearances in the El Paso Affair. They are prepping for the famous fight as Lancer is getting ready to leave.

Since my fictitious character wasn't there, it was convenient to have him heading out to his next assignment or he WOULD have been helping his friends at the Corral. It seemed only right.

Our hero is on his way to the border city to help an old friend, a real life character named Dallas Stoudenmire. And if you don't think it was a chore writing the name "Stoudenmire" what seemed like a billion times over nearly 200 pages of text, you haven't written a novel before. Here I place a big "LOL" in the story.

Stoudenmire was a famous lawman who had his time in El Paso and the story itself is inspired by true events with some pretty strong literary license. I hope you will enjoy the story and my daughter Julia's new artwork.

You will notice for the first time we actually have people on the cover. I've always resisted this but times change and so do theories and it was time to put some bodies on the cover. She did a great job. Of course, the holster minus the pistol is still there. My motto regarding the Lancer; Hero of the West character is still; brains first, brawn second and the gun only when it's necessary. This hero remains true to form. 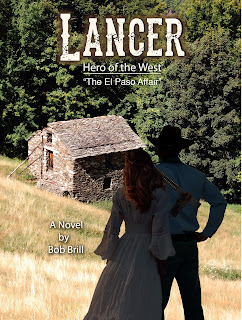 Although you will see some subtle changes in the man as you read due to his growth as a character, you will also see the same distinguished gentleman gunfighter who respects all around him and does what he has to do. I reveal a little more about his past in this book so I hope you enjoy Lancer; Hero of the West - the El Paso Affair, either on Amazon, or from booksellers or on our website.